NEW DATE DUE TO STRIKE ACTION

From single cells to tumours: bridging scales with individual-based models 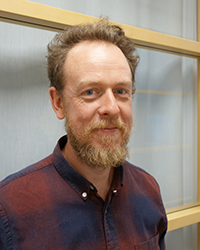 Our BioMaths Colloquium Series enters the new year with a seminar by Professor Philip Gerlee from Chalmers University of Gothernburg. Philip Gerlee obtained his PhD from University of Dundee in 2008 under the supervision of Alexander Anderson. His thesis work focused on modelling the evolutionary dynamics of solid tumour growth using hybrid cellular automata. After his PhD-studies he was a postdoc at the Niels Bohr Institute in Copenhagen and later at the Sahlgrenska Cancer Center in Gothenburg, where he started workiing on mathematical models of brain tumour growth. During 2013-2014 he worked as a Research Scientist at IMO, Moffitt Cancer Center after which he became assistant professor at the Mathematical Sciences, Chalmers University of Gothenburg/University of Gothenburg. Apart from mathematical oncology he also specialises in evolutionary game theory, ecology and epidemiology.

Glioblastoma is the most common type of primary brain tumour, and despite intense research efforts in the last 30 years, little improvement has occurred in the treatment of this tumour. One reason for this failure is the genetic and morphological diversity of tumours from different patients. While genetic information is readily available we still lack an understanding of how it translates to cellular properties and further into morphological characteristics of the tumour. In this talk I will give an overview of our recent attempts at understanding the link between single cell properties and the behaviour of populations of cancer cells. To this end we have created mathematical models of specific experiments, which given data in terms of microscopy images provide us with estimates of cellular parameters such as the migration rate and rate of division. I will also discuss how parameter estimates from different assays can be compared and how they connect to the human disease.