The fractal cortex: A multi-scale surface-preserving analysis suggests all cortices are approximations of a single universal shape 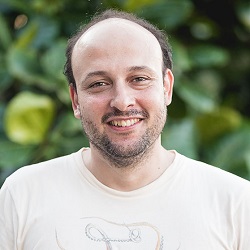 Our BioMaths Colloquium Series continues with a seminar by Bruno Mota from the Instituto de Física at the Universidade Federal do Rio de Janeiro. Bruno holds BA and MA degrees in physics from the Federal University of Minas Gerais (UFMG – Brazil), and a PhD in Cosmology from the Brazilian Center for Physics Research (CBPF). While working on his thesis about ‘Detection and detectability of Cosmic Topology’ he collaborated with Prof. Suzana Herculano-Houzel (UFRJ, now Vanderbilt U.) on mathematical models for cellular composition in brains, and went on to work as a postdoctoral researcher in her lab. What was supposed to be a brief interdisciplinary excursion eventually became his main research focus, and he was hired as a professor at the Physics Institute of the Federal University of Rio de Janeiro in 2013. His main focus currently is creating and testing models to understand the shape of the brain from first physical and evolutionary principles. He heads the metaBIO lab (‘Experimental Mathematics and Theoretical Biology) and is a Serrapilheira grantee, cook and cyclist.

The shape of the mammalian cerebral cortex is probably one of the most complex ever studied by science. At first glance, any attempt to express it, or significant features thereof, from first principles, would seem doomed to failure. Indeed, there are many ways of comparing their morphological features: Either in terms of summary quantities such as volumes and areas for gray and white matter, or by the detailed description of each sulcus and gyrus. Although either approach can be very informative in a comparative neuroanatomy context, they provide no prior expectation of how the various measures should scale with respect to each other, and present a bewildering diversity of complex shapes, both within each cortex and across individuals and species. In this talk, working from first principles, I will express cortical morphology using a more natural set of variables across length scales, rather than across spatial position. Using this new framework, I’ll show that the shape of all cerebral cortices analyzed so far are approximations of a single universal fractal shape; and that the main distinction between cortical shapes is the range of scales at which this approximation remains valid. To my knowledge, this is the most universal description of the cortical morphology that is at the same time mechanistically insightful and in full agreement with empirical data across species and individuals. I hope this new framework for expressing and analyzing the shape of the cortex, besides revealing a hitherto hidden regularity of nature, can become a powerful tool to characterize and compare cortices of different species and individuals, across development and aging, and across health and disease.